GET YOUR FREE HOMESTEAD PROJECT PLANNER. SAVE MONEY AND TIME! OH YES!

Have you gotten your FREE Mini Home Planner yet? What are you waiting for!

Get the help you need to plan a productive year on the homestead! Grab your FREE Homestead Project Planner HERE. Thanks for visiting!

How to use goat hobbles to help control a jumpy goat on the milk stand.

There is nothing worse than trying to milk a goat that is kicking and jumping. You try so hard to keep your cool yet your goat has other things in mind and standing still to be milked is definitely not one of them.

Luckily there is something you can do to help with a jumpy goat. They are called goat hobbles and they are a simple tool that can save your sanity on the milk stand.

A few years ago my patience was put to the test when I had one goat in particular that simply hated to be milked. Well, let’s back up just a bit, she hated to have her udder touched in any way. Now, don’t get me wrong, she was a totally sweet and loving goat. She would and still will, stand still to be stroked and loved on just as long as she likes but milking? Not going to happen. 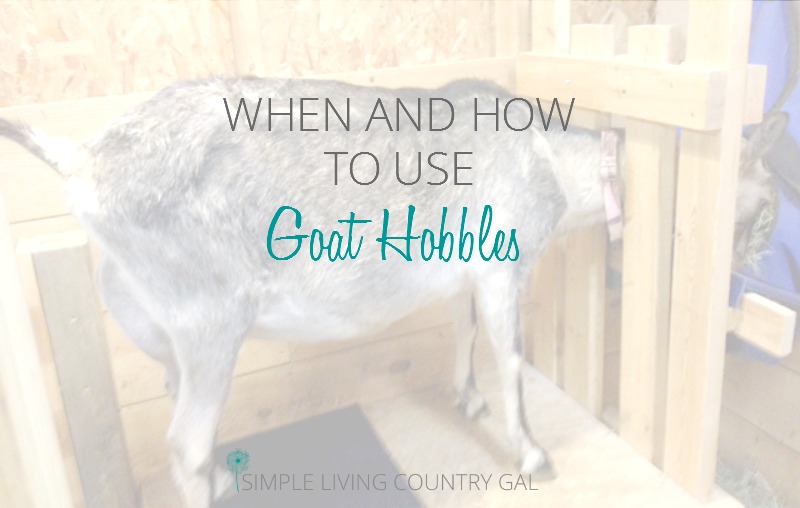 I have told you about Wren before, she is my Alpha female and ironically enough she is afraid of her own shadow. One day I had put a black mat on the milk stand to give the does more traction and to prevent slipping.

That first morning I walked Wren up to the stand and just before we got to it she stopped dead in her tracks. She took one look at that black mat and ran off the other way!

No matter how many times I tried, she refused to step up onto the milk stand. I had no idea why at first but then realized it was that darn black mat.

So I removed the mat and tried again. It took a couple of attempts, but she finally did go up into the milk stand.

Oh…my crazy quirky goat Wren, how I do love her. 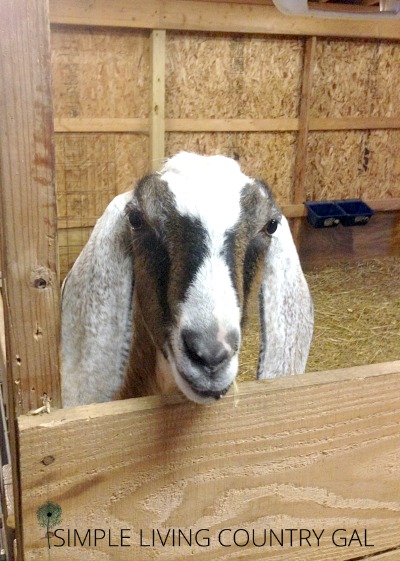 As I said before, Wren is a sweet goat, but a complete handful to milk. She basically resembles an Irish step dancer bouncing all over the stand when I milk her.

I used to milk as fast as possible so I could get done before she finished her feed and kicked the milk bucket over.

After a few weeks of milking fast, I decided I needed to find a solution that would work for both of us. I did some research and found some information on Goat Hobbles. I had never heard of them before and I was very intrigued.

What are goat hobbles and how can I use them to keep a goat from kicking the milk bucket?

Goat hobbles are a binding tool for your goat’s hind legs that help to hold them in place. They restrict movement just enough so you have time to move the milk bucket before she can kick it over or stick her dirty foot inside altogether.

There are several ideas for making DIY goat hobbles that are available on Pinterest and to be true to my cheapskate self, I admit I did try them out. Even though the homemade hobbles were a success for the poster, my Wren wriggled out of those babies faster than lightning. 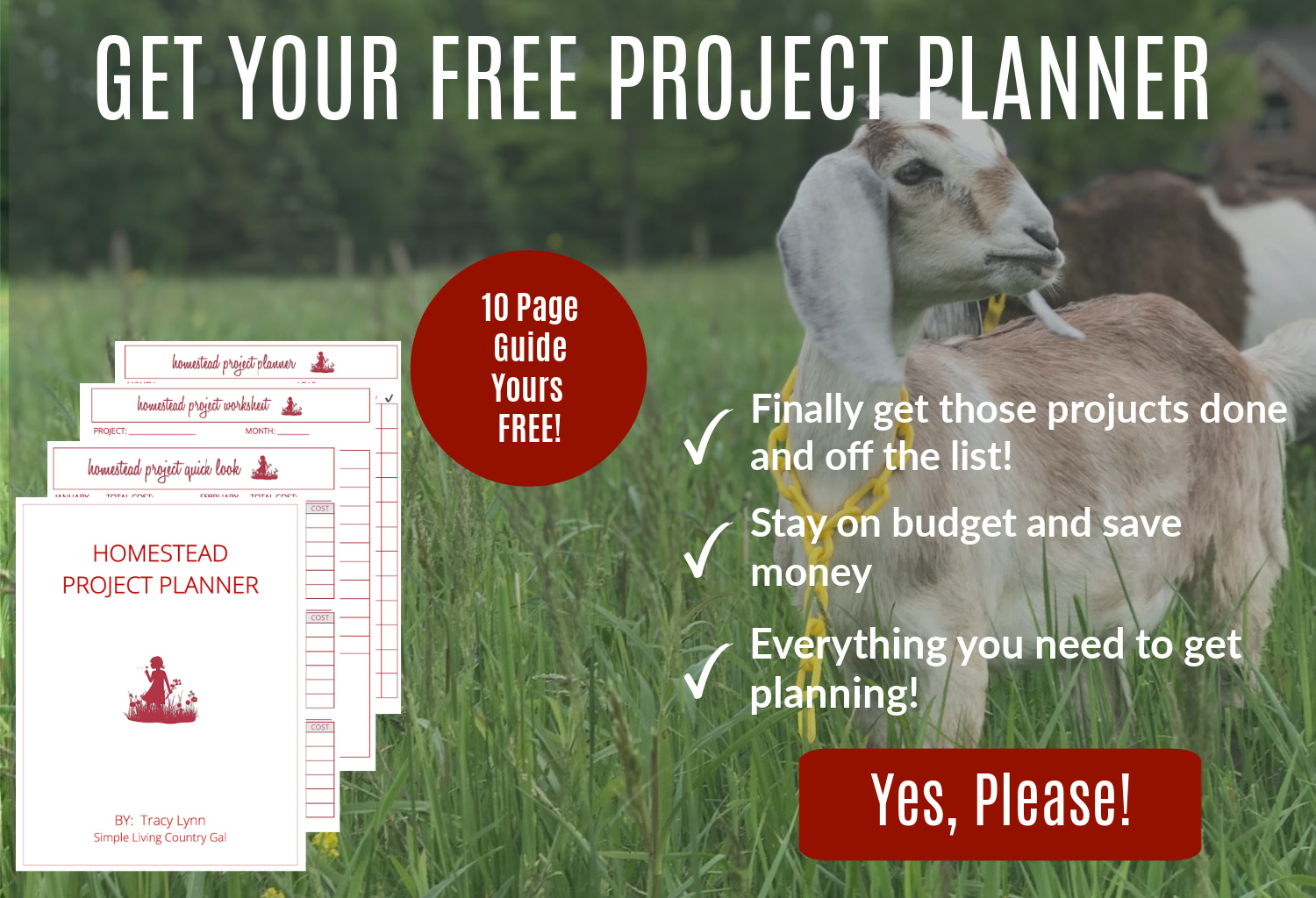 I finally bit the bullet and purchased a pair online. After quite a bit of searching, I found these goat hobbles on Amazon and I really like them. The straps are wide and thick and the velcro is sturdy enough to keep the doe from kicking out easily, yet are easy to use and to adjust.

I have to stop here and say that those goat hobbles were the best money I have EVER spent on anything. Ever.

How to milk a difficult goat using goat hobbles?

Hobbles are simple really, just a wide velcro strap that you wrap around each of the doe’s upper legs. Once secured into place the hobbles will keep your goat from kicking and jumping keeping both you and her safe on the milk stand. 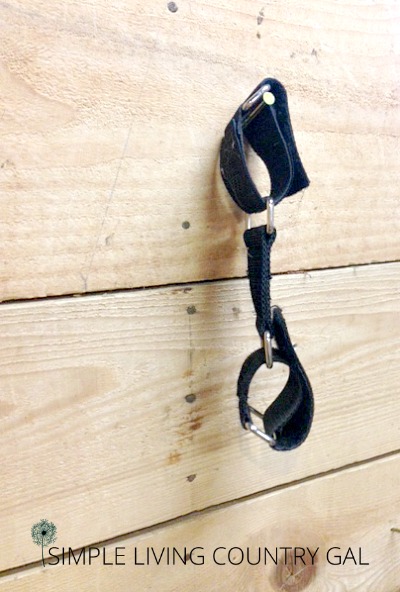 The first day I used them I put them on without any fuss from her. After they were in place she did try to kick and jump but she quickly found that she was unable to do so and settled in to eat without any more shenanigans. 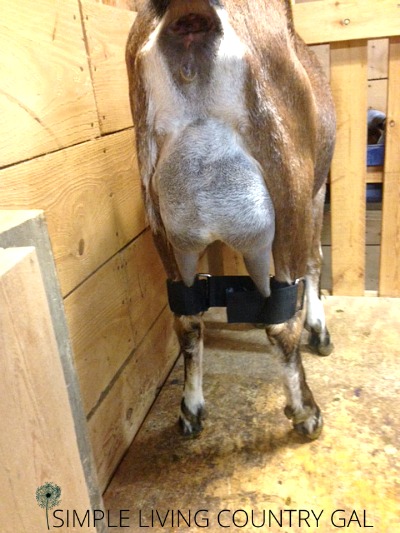 Where to place the goat hobbles so they work effectively.

When you are milking a difficult goat, it is important to make sure the hobbles are on the goat’s upper back legs. If you put them on the lower leg, your goat will simply kick them off. By placing them up high you will keep her legs secure yet still allowing her some movement. This helps her to remain calm once the hobbles are secured into place. 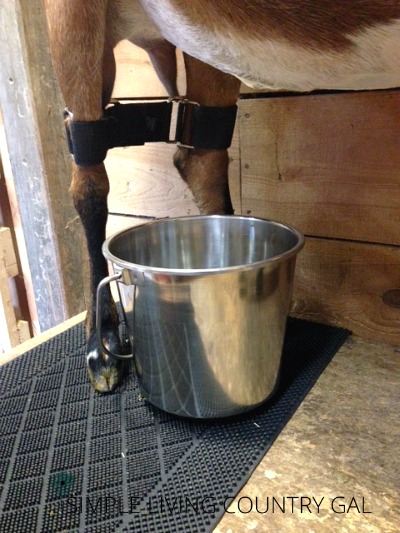 READ: HOW TO EASILY TRAIN YOUR GOAT

The side view shows the placement a bit better. If you find the goat hobbles get in the way of your milking you might need to adjust them a bit or adjust how you milk. If your goat’s teats are longer you can easily move them in front of or behind the hobbles.

If your goat’s teats are smaller then you might need to adjust how you milk a bit. At first, it feels a bit awkward to have the strap in the way, but after a few times, you will find they are quite easy to milk around. 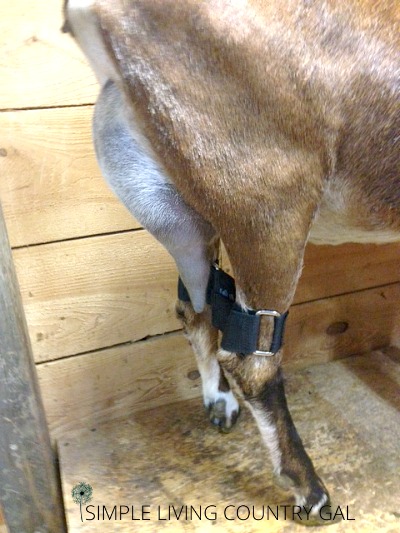 Since we began using the goat hobbles with Wren she has been milking like a champ. But like with anything that has to do with goats, it is super important to keep your cool especially when milking. Goats are a very emotional animal and remember things for quite a while. One smack from you on the milk stand might cost you weeks of retraining.

So, take a breath, shake it off, and remember your goats are simply animals that get easily spooked and are not doing anything intentionally.

Another great use for Goat Hobbles is if you have a doe that refuses to let her kids nurse.

I had one such doe that out of nowhere stopped nursing her young kids. I tried holding her but since I have large Nubian goats, holding is simply not an option. If they don’t want to do something force is not going to cut it.

I then got the idea to put her up on the milk stand with some feed to use as a distraction. I put her buckling up and she still kicked him off so I decided to give my goat hobbles a try and they totally worked!

Those Hobbles were a lifesaver and kept me from having to bottle feed that little buckling. 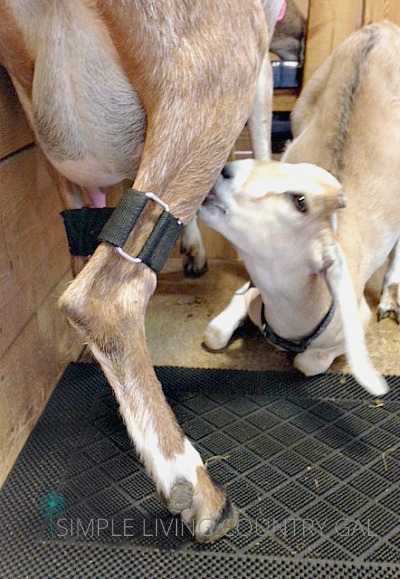 A closer view shows how easily she wears them and Dusty (her little buck) is able to nurse with no problems at all.

Absolutely! Not only are they humane but the goat hardly notices them at all.

The velcro is secure enough to hold your animal in place yet not so binding that you can’t get them off quickly in an emergency.

The velcro allows you to put them on quickly and adjust the tightness so the animal is comfortable at all times. It is very important to make sure to use them on the upper leg to be effective. If you put them onto the lower leg, she will simply toss them off with a kick.

SLCG PRO TIP: If you have a particularly jumpy goat you will need to get her used to the tearing sound of the velcro strap. Just open and shut them a few times in her presence until the sound no longer startles her. Again, small steps slowly is the best advice I can give any new goat owner.

Another use for goat hobbles is maintenance time. If you have a goat that hates to have her udder shaved, her body clipped, or other routine work done, you can use the hobbles. This will not only save you a headache but also reduce the risk of possible injury. By securing the back legs you will be able to do most of your routine work without too much trouble. 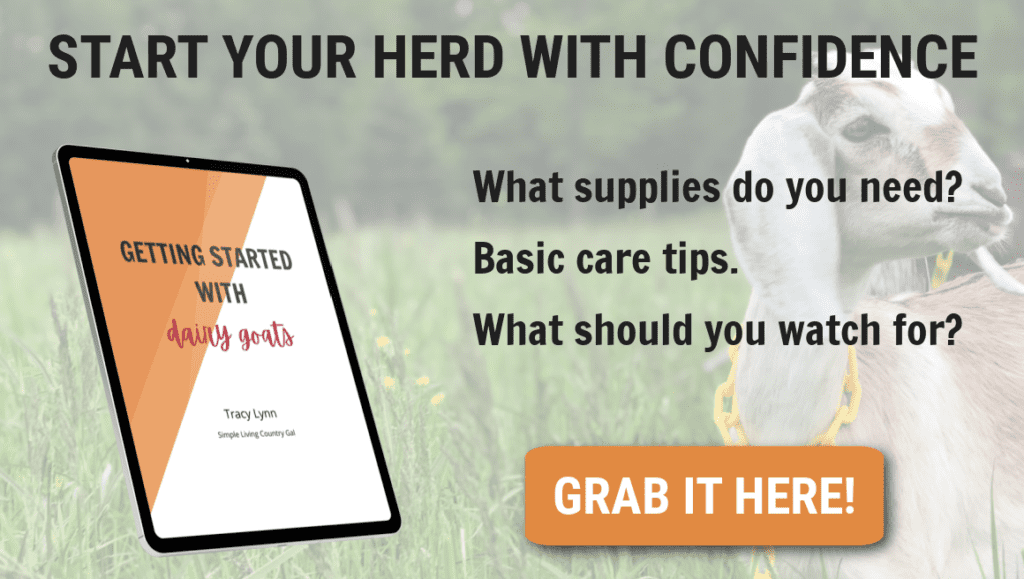 Goat Hobbles will not only keep both you and your doe safe but help you to milk a difficult goat.

One final tip, make sure the hobbles you choose will fit your goat. The hobbles mentioned in this post are for a large full breed Nubian goat and may not fit a dwarf goat or mini goat. Read the specifications before you buy to make sure.

If you have a doe that is anything like my Wren or Sparrow, I HIGHLY suggest the small investment into Goat Hobbles especially if you want to milk a difficult goat.

Do you use goat hobbles to help keep a goat from kicking the milk stand? 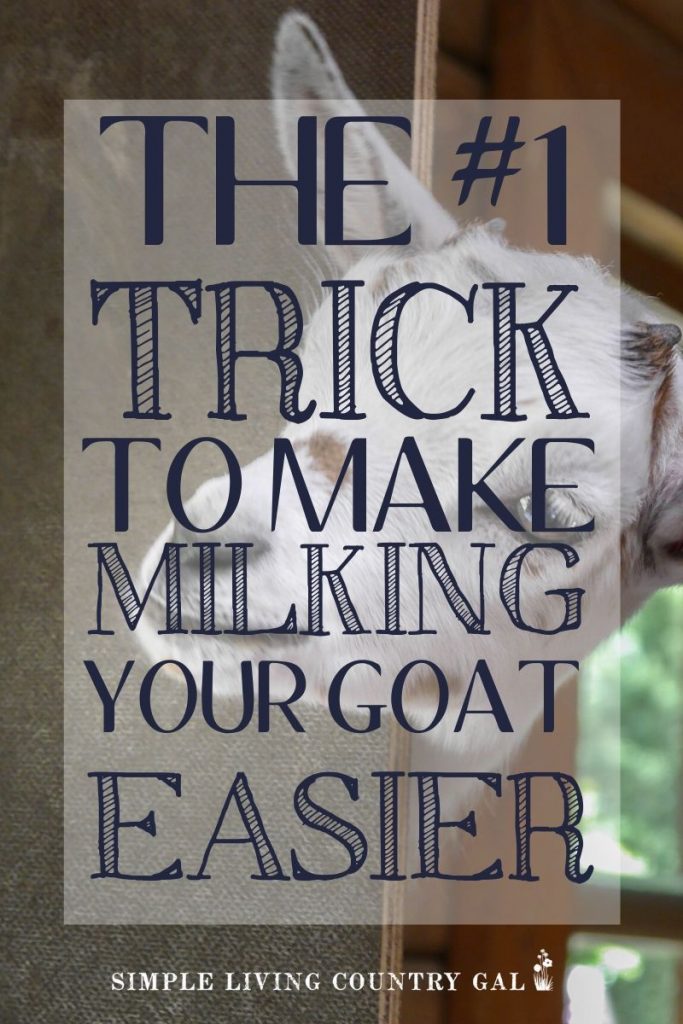 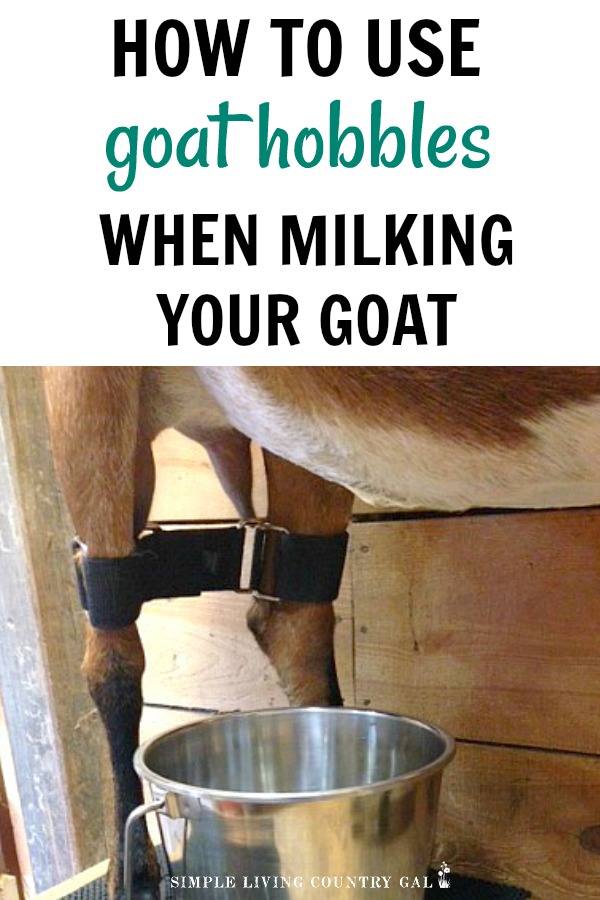 Hi there, my name is Tracy and I am a city girl gone country. I am a redneck frugal living goat owner and I am working everyday towards living a more simple life. Now I am teaching others how to do the same. From growing their own food, making their own cleaning supplies, cutting back, and paring down. It’s all about making more of what we need so we spend less, save oodles of money and live better!
Contact me

This site uses Akismet to reduce spam. Learn how your comment data is processed. 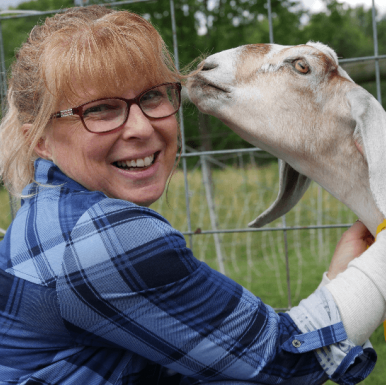 Tracy Lynn is the founder of Simple Living Country Gal and Our Simple Homestead. Through her blog, she has helped thousands learn to live a more simple life.

We are a participant in the Amazon Services LLC Associates Program, an affiliate advertising program. As an Amazon Associate I earn from qualifying purchases from Amazon.com and affiliated sites.
Disclaimer: In accordance with FDA guidelines, the information and products offered on this website are not intended to diagnose, treat, cure, or prevent any disease. I am not a medical professional. Before administering any medications to your animals please contact a veterinarian first. 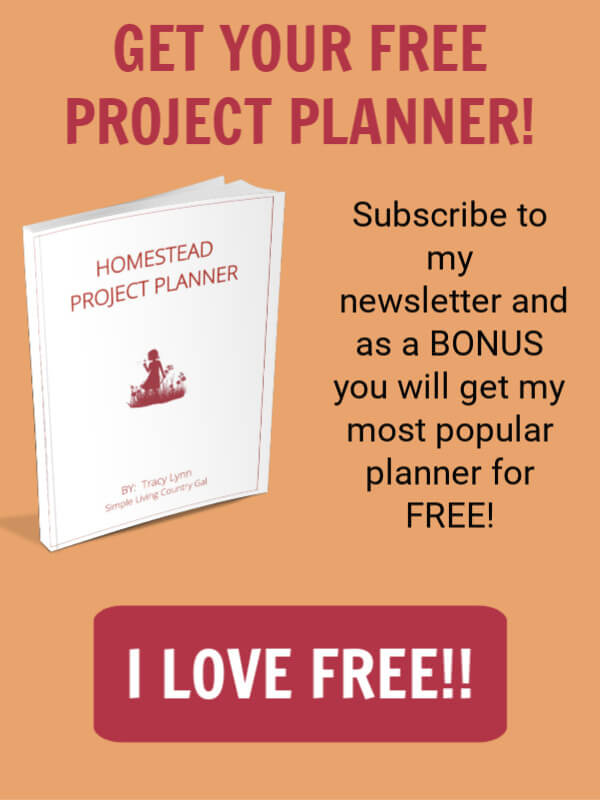 You are welcome and encouraged to link to simplelivingcountrygal.com or use a single image with a brief description to link back to any post. Republishing posts in their entirety is prohibited. Feel free to pin on Pinterest!

Thanks for stopping by!